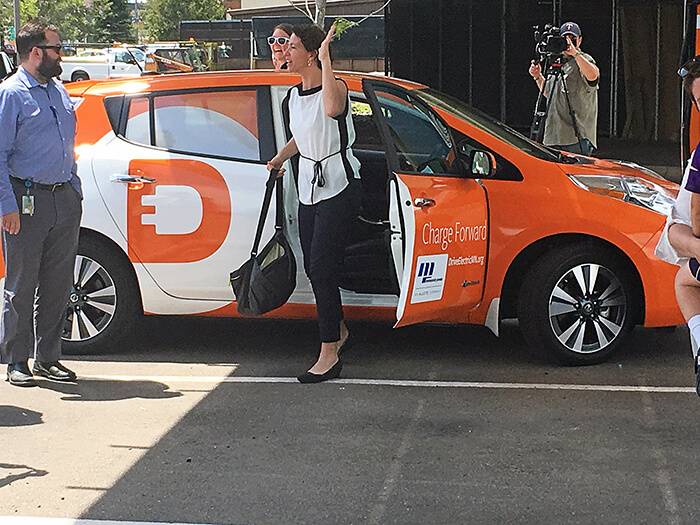 Duluth Mayor Emily Larson waves Thursday as she gets out of a Drive Electric Minnesota Nissan Leaf driven by Pam Schmitt, customer solutions analyst I. Schmitt drove Larson to the celebration of the solar-powered electric vehicle charging station in Canal Park in the Leaf Minnesota Power is displaying in the area through at least June 16.

Kris Spenningsby answers a question about how the electric vehicle charging station works as Duluth Mayor Emily Larson looks on. 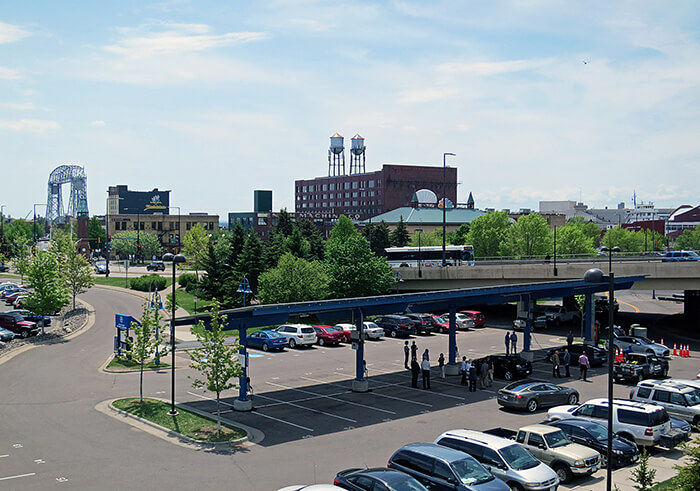 About 40 people and media outlets attended the event in the parking lot near Endion Station on a warm, sunny day, and seven electric vehicles, six with private owners and one Nissan Leaf MP has on display through Drive Electric Minnesota, were there to demonstrate the charging station.

Kris Spenningsby, supervisor of retail accounts for Minnesota Power, said the project was borne out of the partners’ search for ways to reduce carbon emissions in our day-to-day lives.

Duluth Mayor Emily Larson said the city has a goal to reduce its greenhouse gas emissions 80 percent by 2050, and the charging station is a sign of the partners’ commitment to clean energy.

“Partnering renewable energy with parking and convenience in the heart of our tourist district is just fantastic,” she said. “We achieve our energy goals when we work well in partnership with others.”

“We need to bring every technology available to the table,” he said. “This project is a great example.”

Brad Boos, president of Hunt Electric’s Duluth branch, said solar energy projects have become a big part of the company’s business, with more than 400 megawatts of projects under contract or pending this year.

“Hunt is now focusing on renewables,” he said.

The three private partners invested about $378,000 in the project in Canal Park and donated it to the city of Duluth, which contributed the use of the space and will operate and maintain the facility for its expected 25-year lifespan. The solar array became operational last week.

“I think this is a great example of how we can work together and achieve a project that works well for everybody,” Spenningsby said.

Some facts about the solar-powered charging carport and electric vehicles: