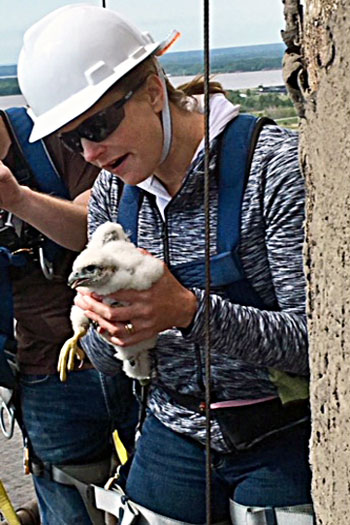 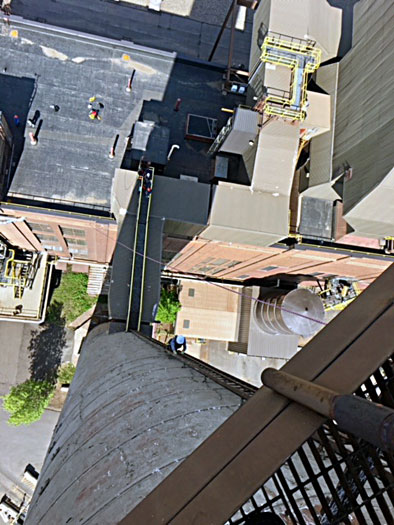 Stacy South climbs 100 feet up to the platform and next box on the stack at Hibbard. She said the climbing and banding experience helped her overcome a fear of heights.

Previous Next
High above Hibbard with Feisty, Henry and Brunhilde

Stacy South, Lance Zetah and Michael Skoglund made the 100-foot climb to the platform and falcon nest box about 240 feet above ground on the Hibbard stack with John Howe, director of the Raptor Resource Project in Decorah, Iowa.

South, Zetah and Skoglund each held a chick while Howe placed the leg bands, and also named each bird. South chose Feisty for her chick because of its attitude and its clinging to her finger before banding. Zetah named his bird Henry after a young nephew, and Skoglund chose Brunhilde after his wife’s grandmother and the Valkyrie warrior.

The stack climb and banding were organized by Doug Braff, programmer analyst senior, who maintains Minnesota Power’s falcon cams at Hibbard and Boswell Energy Center. He said a server problem has taken the Hibbard and Boswell Energy Center falcon cams offline on Minnesota Power’s website, and they won’t be viewable again until after this year’s falcon families leave the nest boxes. In addition to bypassing the server to get the falcon cams on YouTube, he plans to replace the cameras with newer, improved technology, a job that can’t be done until after the falcons depart.

Amy Ries of the Raptor Resource Project said all three chicks banded Monday appeared to be healthy, which was a nice surprise because of repair work done on the Hibbard stack during egg-laying and hatching times.

“Despite the disturbance during the repairs, three of four eggs hatched and the parents raised the chicks,” Reis said. “That was really interesting, and better than what I expected.”

Falcons feed mostly on other birds, and Ries said there were signs of pigeons, gulls, golden-shafted flickers and blue jays in the nest box.

The leg bands allow researchers to track the falcons and their behavior, and do not harm the birds. Falcons raised in Minnesota Power nest boxes have been reported in Florida, Central America and on oil rigs in the Gulf of Mexico.

Monday’s effort brings to 98 the number of falcons banded at Hibbard and Boswell since 1993, when the nest box was established at Boswell. Since the Hibbard nest box was built in 2008, 26 chicks have been banded there and 44 hatched. In some years, banding was not done because of scheduling conflicts or other reasons.

Banding at Boswell, where three chicks are thought to have hatched, is tentatively scheduled for Wednesday, June 20, and is dependent on the weather.

South said part of the reason she climbed the stack was to overcome a fear of heights, and holding the chicks helped her forget where she was.

“I would say my favorite part was holding the falcon at the top,” she said. “They are so soft and light; they just need a gentle touch to keep them still.”

Skoglund said he was an avid rock climber before coming to Minnesota Power, so he was looking forward to the climb. What he found in the nest box he hopes to pass on to his children.

“It was an awesome opportunity to share such a close-up look at nature with my kids,” he said. “Maybe this will get them to start looking up, trying to see the falcons and maybe other birds. It can spark something that can go a lot further one day.”

Zetah said his favorite part of the climb and banding was holding the falcon chick.

“Climbing the stack and putting the bands on the baby falcons are both likely once-in-a-lifetime experiences,” he said. “I’ve never done anything close to either, so I jumped at the opportunity. And it was a lot of fun.”

A high-angle rescue team of Boswell employees Joshua Garner, Katie Hopkins and Robert Reed also was on hand to instruct Zetah, Skoglund and South on fall protection and to support the banders.